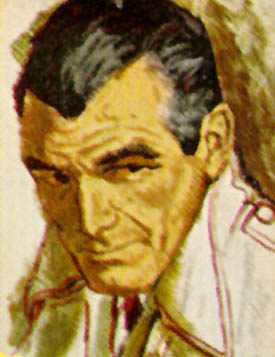 Probably, those of you who have gone to the trouble to find this site already have an idea who Matt Helm is. If your ideas are based on the Matt Helm motion pictures, this is not the site for you. If your ideas are based on the TV series, this site is not for you. Our Matt Helm is neither the comic agent as portrayed by Dean Martin, nor the sleuth portrayed by Tony Franciosa. The movies and TV show will not be mentioned again.

Here we deal with the Matt Helm who periodically makes the world a safer place, as documented in a series of novels by Donald Hamilton that began with Death of a Citizen in 1960. Our Matt Helm is, to put it bluntly, an assassin working for an unnamed U.S. Government agency, whose job it is to kill people who pose a threat to the United States. If this is the Matt Helm you know and love, read on. Otherwise, go check out a James Bond site somewhere.

Research and Content by Don Winans
Designed by Brady World Designs
(with a graphics assist by Matt Winans)
Matt Helm ™ is the property of Donald Hamilton.
and is a Trademark of Integute AB
This independent reference to, and appreciation of, the Matt Helm book series
is copyright 1998-2012 - Don Winans
Originally posted in June 1998 - Last Modified 05 April 2008
Send comments/criticisms/fan mail to MacBorden@aol.com